Roy White of Vienna has died at the age of 79. Roy was a teacher and chess coach for many years. Obituary

The second day of team play for the WV Scholastic League has been changed from January 29 to February 19. The individual event will be rescheduled and should be held before the WV Scholastic Championship on April 2.

Dennis Gogel, 6-time Indiana State Champion, and member of the KY Chess Hall of Fame died November 21, 2021 at the age of 67.

I got to thinking about Siegried Werthammer’s 13 titles and wondered what are some other interesting facts about the state champions.

Longest time between titles:
Ed Garner – 1986-2014. Joe Barker used to brag that his 1st and 2nd was the longest gap for some reason, but that’s not even close at 13 years between them. My own 10 year gap felt like an eternity.

21 players competed in the 82nd WV State Championship, held in Clarksburg, WV. Benjamin Good and Lewis Sanders were the co-champions, who each had four wins apart from their last round draw.

A trio of youngsters from Pennsylvania kept the old timers on their toes, including Lydia Tang, who tied for 3rd with Robert Canary. Lydia had wins over former champions Sam Timmons and Ed Garner, before losing to Good in the third round. She bounced back with a win over Byron Funkhouser and a draw with John Roush. Well done!

In association business, Craig Timmons swapped places with Bob Greer, and is now the president while Greer is the scholastic coordinator. Elijah Schultz of Hurricane was elected Vice President. The 2022 Action and State titles will be held in Huntington. We also thank Markle Butcher who has announced he will be leaving a sizable donation to the association in his will, which we hope will not be executed for quite some time yet. 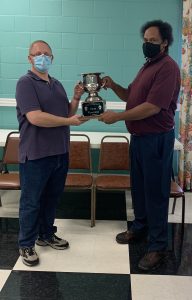 We are sad to announce that Sefus Ellis has passed away. He was 63 years old.

The Elkins Chess Club is no longer meeting at the library. They are currently looking for a new site.

The Scholastic Championships have been canceled:

Covid has caused a lot of changes. Because of Covid, lack of registrations, and the time of year where families are celebrating graduations and other events, we are cancelling the tournament. I will refund any entry fees that are received. I apologize for the short notice.

It is my hope that next school year, things will get back to normal and we able to host a league and play more tournaments.